What are Route Numbers? 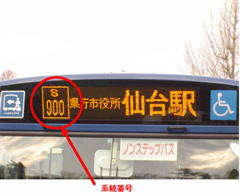 A bus route is a route that the bus takes with different beginning and end points and other stops along the way.

To make the destinations on the bus route easy to understand, route numbers are made up with user-friendly numbers and letters.

Three-digit route numbers are routes that depart from, arrive at or pass through Sendai Station. Sendai Station is considered the center of the bus routes and the first two digits of the route's numbers show their general direction in relation to Sendai Station.

POINT 4
Some routes have alphabetical letters.


1. Inward services heading for the city center include the following alphabetical letters according to the destination.